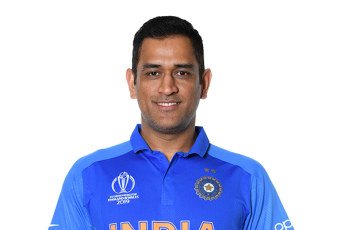 Mahendra Singh Dhoni (born 7 July 1981), is a former international cricketer who captained the Indian national cricket team in limited-overs formats from 2007 to 2017 and in Test cricket from 2008 to 2014. He is currently the captain of Chennai Super Kings (CSK), a franchise-based team of the Indian Premier League.

Dhoni made his ODI debut on 23 December 2004 against Bangladesh and played his first Test a year later against Sri Lanka. In 2007, he took over the ODI captaincy from Rahul Dravid. In test cricket, his captaincy record was mixed, successfully leading India to a series win against New Zealand (in 2009) and the Border-Gavaskar Trophy (home series in 2010 and 2013) against Australia while losing to Sri Lanka, Australia, England, and South Africa by big margins in away conditions. He announced his retirement from Tests on 30 December 2014 and was captain of the limited-overs game in 2017. Having won the triple ICC limited-overs tournament as captain (inaugural 2007 ICC World Twenty20, 2011 ICC Cricket World Cup and 2013 ICC Champions Trophy) and brought the Indian cricket team to number one position in ICC test rankings in 2009, Dhoni is often considered as the greatest captain of the Indian cricket team. Furthermore, he led CSK to win 2010, 2011, 2018 and 2021 editions of IPL, becoming the second most successful IPL captain after Rohit Sharma.

MS Dhoni is the only Indian captain who has led India to all three major ICC events. From winning the maiden T20 World Cup in 2007 on his captaincy debut to lead India to a World Cup victory on home soil in 2011. In 2013 he has won the Champions Trophy. Under his captaincy, India holds the numero uno position in the Test ranking for 18 months. MS Dhoni is the only non-Australian captain who has led his team in more than 100 matches. He is also the third captain to have won the 100 matches after two Australian captains after Ricky Ponting and Allan Border. Dhoni is the fourth fastest batsman who has completed 8000 runs in New Zealand fifth and final match. In the 2013 Champions Trophy Dhoni has won the Champions Trophy which made Dhoni have all three ICC trophies in his kitty. In the Champions Trophy India was the only team who were unbeaten. In the final, India defeated England by 5 runs. On November 1, 2011, the Indian Territorial Army conferred with honorary rank Lieutenant Colonel to Dhoni after which Dhoni has become the only captain after Kapil Dev to receive this prestigious award. 2008 and 2009 Dhoni was awarded the ICC Player of the Year trophy. In 2011, 2012 and 2013 under Dhoni captaincy, India was named as ICC team of the year.