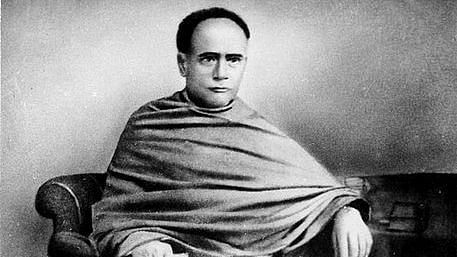 Ishwar Chandra Vidyasagar (1820-1891) was one of the pillars of the Bengal renaissance who managed to continue the social reforms movement that was started by Raja Rammohan Roy in the early 1800s. Vidyasagar was a well-known writer, intellectual and above all a staunch supporter of humanity. He had an imposing personality and was revered even by the British authorities of his time. He brought about a revolution in the Bengali education system and refined the way the Bengali language was written and taught. His book, ‘Borno Porichoy’ (Introduction to the letter), is still used as the introductory text to learn Bengali alphabets. Poet Michael Madhusudan Dutta while writing about Ishwar Chandra said: "The genius and wisdom of an ancient sage, the energy of an Englishman and the heart of a Bengali mother".

In 1841, at the age of twenty-one, Ishwar Chandra joined Fort William College as the Head of Pandit in the Sanskrit department. The brilliant mind that he was, he soon became proficient in English and Hindi. After five years, in 1946, Vidyasagar left Fort William College and joined the Sanskrit College as 'Assistant Secretary'. But just after a year he entered into a serious altercation with the College Secretary, Rasomoy Dutta, over administrative changes he recommended. Since Vidyasagar was not someone who would bow down to power, he resigned from the post on being refused by the college authorities and resumed employment at Fort William College but as a head clerk. He came back to Sanskrit College as a Professor at the request of the college authorities but imposed a condition that he be allowed to redesign the system. He became Principal of Sanskrit College in 1851. In 1855, he assumed the responsibilities as a special inspector of schools with additional charges and travelled to remote villages in Bengal to oversee the quality of education.

He was the most prominent campaigner for Hindu widow remarriage, petitioning the Legislative council despite severe opposition, including a counter-petition (by Radhakanta Deb and the Dharma Sabha) which had nearly four times as many signatures. Even though widow remarriage was considered a flagrant breach of Hindu customs and was staunchly opposed, Lord Dalhousie personally finalised the bill and the Hindu Widows' Remarriage Act, 1856 was passed. He so excelled in his undergraduate studies of Sanskrit and philosophy that Sanskrit College in Calcutta, where he studied, gave him the honourable title "Vidyasagar" ( from Sanskrit, Vidya "knowledge" and Sagar "ocean"). He is considered the "Father of Bengali prose".