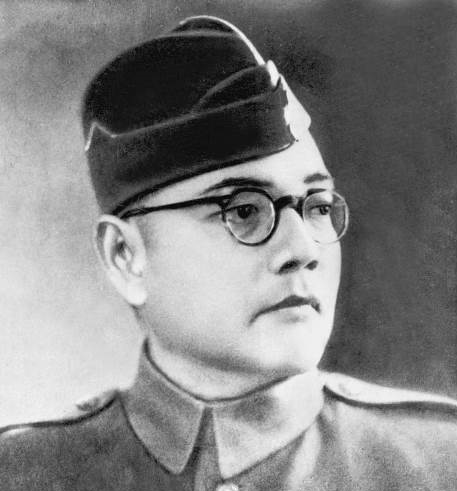 Subhas Chandra Bose ( 23 January 1897 – 18 August 1945) was an Indian nationalist whose defiance of British authority in India made him a hero among Indians,[i][j][k] but his wartime alliances with Nazi Germany and Fascist Japan left a legacy vexed by authoritarianism,anti-Semitism, and military failure. The honorific Netaji (Hindustani: "Respected Leader") was first applied to Bose in Germany in early 1942—by the Indian soldiers of the Indische Legion and by the German and Indian officials in the Special Bureau for India in Berlin. It is now used throughout India.

Subhas Bose was born into wealth and privilege in a large Bengali family in Orissa during the British Raj. The early recipient of an Anglocentric education, he was sent after college to England to take the Indian Civil Service examination. He succeeded with distinction in the vital first exam but demurred at taking the routine final exam, citing nationalism to be a higher calling. Returning to India in 1921 to join the nationalist movement led by Mahatma Gandhi and the Indian National Congress, Bose followed Jawaharlal Nehru to leadership in a group within the Congress which was less keen on constitutional reform and more open to socialism. He became Congress president in 1938. After reelection in 1939, differences arose between him and the senior leadership of the Congress, including Gandhi, ostensibly over the future federation of British India and princely states based on the Government of India Act, 1935, but also because discomfort had grown among Congress leadership over Bose's imperious character, his negotiable attitude to non-violence, and his plans for greater powers for himself. After a large majority of the Congress Working Committee members resigned in protest, Bose resigned as president and was eventually ousted from the party.

Bose joined the Non-Cooperation Movement which was started by Mahatama Gandhi who made INC a powerful non-violent organization. During the movement, he was advised by Mahatma Gandhi to work with Chittaranjan Das who became his political guru. He started the newspaper 'Swaraj'. In 1927, after being released from prison. He became general secretary of the Congress party and worked with Jawaharlal Nehru for Indian independence. In 1938 he was elected president of the Indian National Congress and formed a national planning committee, which formulated a policy of broad industrialization. He formed the Azad Hind Fauj, also known as the Indian National Army, or INA. When Japan defeated the British armies and occupied almost all the countries of south-East Asia, the league formed the Indian National Army from among the Indian prisoners of war with the aim of liberating India from British rule. In the meantime, Subhas Chandra Bose had escaped from India in 1941 and gone to Germany to work for India’s Independence. In 1943, he came to Singapore to lead the Indian Independence League and rebuild the Indian National Army (Azad Hind Fauj) to make it an effective instrument for the freedom of India. Netaji went to the Andaman which had been occupied by the Japanese and hoisted the flag of India. In early 1944, three units of the Azad Hind Fauj (INA) took part in the attack on the north-eastern parts of India to oust the British from India. Subhas Chandra Bose still today is considered the most influential freedom fighter of India, with extraordinary leadership skills and a charismatic oratorio he led many important freedom struggle movements and helped India get Independence.