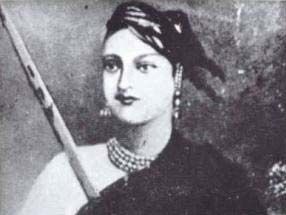 Lakshmibai, the Rani of Jhansi ( 19 November 1828 — 18 June 1858), was an Indian queen, the Maharani consort of the Maratha princely state of Jhansi from 1843 to 1853 as the wife of Maharaja Gangadhar Rao. She was one of the leading figures of the Indian Rebellion of 1857 and became a symbol of resistance to the British Raj for Indian nationalists.

Rani Lakshmibai was born on 19 November 1828 in the town of Varanasi into a Marathi Karhade Brahmin family. She was named Manikarnika Tambe and was nicknamed Manu.Her father was Moropant Tambeand her mother Bhagirathi Sapre (Bhagirathi Bai). Her parents came from Maharashtra. Her mother died when she was four years old. Her father was the Commander of the war of Kalyanpranth. Her father worked for Peshwa Baji Rao II of Bithoor district. The Peshwa called her "Chhabili", which means "playful". She was educated at home and was taught to read and write, and was more independent in her childhood than others of her age; her studies included shooting, horsemanship, fencing and Barakhamba with her childhood friends Nana Sahib and Tantia Tope. Rani Lakshmibai contrasted many of the patriarchal cultural expectations for women in India's society at this time.

Rani Lakshmibai was accustomed to riding on horseback accompanied by escorts between the palace and the temple, although sometimes she was carried in a palanquin. Her horses included Sarangi, Pavan and Baadal; according to historians, she rode Baadal when escaping from the fort in 1858. Her palace, the Rani Mahal, has now been converted into a museum. It houses a collection of archaeological remains of the period between the 9th and 12th centuries AD.